The story is a sniper, from high up on the rooftops, in Highland Park, outside of Chicago, has killed 6 and injured 24 more. As we know, Highland Park has been quite the theme from Matt Stafford, to Scottie Scheffler, to Clayton Kershaw, to Dwayne Haskins, to the release of the Ronald Reagan assassin, John Hinckley, Jr. Also, ‘Highland Park’ is right for a shooting, especially one involving someone ‘military’ trained, on this very militaristic holiday.
Highland Park, Illinois = 109
Highland Park = 109
Shooting = 109
Military = 109

And this comes in the Land of Lincoln, the Civil War US President.

This comes 166-days after the Chicago’s Governor’s birthday (and Robert E. Lee’s.)

It reminds that Joe Biden is #46, but the 45th person to be President, and the next President to die in office will be the 9th, where 45 is the 9th triangular number.

There is very little information on the Mayor of Highland Park.

She is from Cincinnati, Jesuit town.

Also noteworthy, today is 213-days after Illinois’s birthday.
Super Bowl played in (213) and won on 2/13 by local team
-Matt Stafford grew up in Highland Park (Dallas)
-NFL is from Chicago originally

For more information on the shooter, his full name is Robert Eugene Crimo III.

Notice how his video ‘On My Mind’ overlaps with ‘shooting.’

Watch his On My Mind music video here.

It is 47-weeks and days after Obama and Lori Lightfoot celebrated their birthdays. And don’t forget Obama took office at age 47.

Read about 47 and government here.

That was 62-days before the shooting.
Highland Park = 62

Tommy Truthful work Below Zach's Above.

This is the Day Before CERN breaks the world Energy Record in stable beam Collision!

You see how this Ritual Connected to Awake?

The photos showed a strange cloud formation and electrical activities above the CERN complex, and this stirred a bit of media frenzy about “portals” in the sky, in light of the fact that LHC has detected mini black holes while smashing the particles, which could indicate parallel universes in extra dimensions.

In fact in 2014, renowned scientist Stephen Hawking issued a stern warning in his book Starmus that the god particle may end up destroying the universe, a concern shared by many other physicists.  The main worry is the creation of these microscopic black holes that would grow and eventually decay the earth from the inside.

Although CERN scientists try to reassure that these black holes would not destroy the universe, British astronomer Sir Martin Rees agrees with Hawking this may open a Pandora’s box and unleash high-energy “strange matters” that are very unstable and cause a “catastrophic vacuum decay” that would lead time and space to collapse.

In the meantime, while scientists are concerned with black holes and decay of the universe, others from a religious standpoint are wary of CERN’s efforts to investigate extra dimensions and parallel universe through the LHC.  Here, science meets religion in the search for the “god particle”.

The religious community is generally suspicious of CERN activities, and question what does the statue of the Hindu god Lord Shiva (“god of Destruction”) that is prominently displayed outside of the LHC has to do with science.  Also, they note how CERN is located in a place that was once called “Appolliacum” (“Apollyon” in Greek means “destruction”) in Roman times where they believed was a gateway to the underworld.

Given scientists refer to black holes as “bottomless pits” of gravity, and coupled with discussion of opening a doorway into another dimension, many point to warnings in the Book of Revelation: “And the fifth angel sounded, and I saw a star fall from heaven unto the earth: and to him was given the key of the bottomless pit. And he opened the bottomless pit…And there came out of the smoke locusts upon the earth…”(Revelation 9:1-3).

Here, Saint John refers to a time when Satan is given the key to the “bottomless pit” to release a horde of demonic beings resembling locusts upon the world, and some wonder if this Biblical event is connected to the CERN experiments.

It is too early to tell, but now China is also joining the quest and building its own particle smasher five times more powerful than CERN’s LHC.  And as Europe and China both race in search of the god particle, it may not be long before the world finds out who is at the end of that quest—the creator, or the destroyer of the universe.

Scientist and the Elite Try to Hide What Really Happened at CERN, Demonic Entities, Extra Dimensions.

CERN Already Controls You, But The Rockefeller’s Control CERN- This video is about the connection of the Rockefeller family dynasty to CERN. CERN is preparing for a major announcement, that they have discovered something inside the collisions happening at the large hadron collider (LHC). I have warned extensively about CERN and believe that the Illuminati is celebrating the opening of the fifth dimension, one beyond space and time. CERN also invented the internet, a matrix system that now covers the Earth. The internet has now taken over everything about life.

Everything is “wired.” The last thing that isn’t wired is the human body. Implantable devices are necessary to accomplish the wiring of the human body to the WWW. That is why mandatory chipping will come to pass, because every human must become a literal part of the WWW, which is the 666.

Who is behind the machine? We know CERN has received taxpayer money from several governments across the world, but many people don’t realize that the Rockefeller’s are behind a non-profit charity who funds ALL DONATIONS FROM THE UNITED STATES DIRECTLY TO GENEVA. This means that the Rockefeller’s control a HUGE amount of the financing of CERN’s operations.

The Rockefellers also send their own scientists to CERN to conduct experiments. These particle physicists are from Rockefeller University and are some of the top scientists in the world in their respective fields. They have been instrumental in discovering new particles at CERN.
CERN now prepares to announce a HUGE discovery very soon. Some scientists have said this discovery will usher in a new golden era of humanity.

Did CERN Create Black Hole Inside Earth? City Swallowed, Millions Sinkholes Opened, Ocean Level Drops. CERN is opening portals into other dimensions, possibly even hell. Everything you are about to see is real.

CERN is attacking this planet by trying to bring in to reality the existence of Demons and possibly even the Devil (Satan) himself? Smashing particles at the speed of light (or near) is in my theory attacking God himself and as we know, without light there would be no life, Earth or the Moon possibly?

The LHC facility on the Franco/Swiss border is changing weather patterns and even possibly attracting meteors with the huge magnetic force it put’s out? CERN has many backers and many objectors but the most important is CERN itself, only “it” can address the worries of everyday people and they choose not too, why?

So I found a recent publication online of “eerie-looking” photos taken above CERN and there’s some pretty odd, weird and terrifying even scary and apocalyptic scenes unfolding, right in the weather patterns crossing the skies. The unusual weather patterns have conspiracy theorists shouting from the top of the tower again, but this time I think they have a real reason too!

Some of the conspiracy theories about CERN have included that it is being used as a portal to allow Satan to return to Earth. Last October Express.co.uk exclusively revealed claims from former Whitby town councillor Simon Parkes that he held a global meditation to prevent this happening.

The LHC is the world’s largest and most powerful machine and is actually used to collide particles at close to the speed of light in a bid to discover more about physics and the possibility of parallel universes.

The curious machine developed across a 16-mile ring of superconducting magnets has had critics before amid claims it could inadvertently create a black hole that may swallow up the world, but some of these wild conspiracies are among the strangest to date.

CERN, of course, denies trying to change our weather, but it has carried out experiments to create artificial clouds to better understand global warming, which fuels the conspiracies. The official line on what the Awake experiments are about is to develop a new type of accelerator to cut the size of the huge particle physics experiments down by a factor of a hundred or more so they can be carried out on table tops.

The AWAKE experiment, also known as the “Proton Driven Plasma Wakefield Acceleration Experiment,” will use a whole new method that will get particles going much faster in a shorter amount of time. In the meantime, the wild conspiracies are likely to continue. 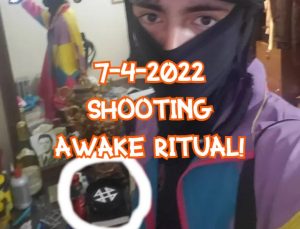 For one more point, Alice Krippin is the doctor responsible for the outbreak in I Am Legend.
Alice Krippin = 201
The Jesuit Order = 201

Censoring the Truth about this Story!

A ritual for CERN To open a Portal to the UNDERWORLD!

CHECK OUT GEMATRIA EFFECT NEWS BREAK DOWN BELOW.

They are Calling on  the Ancient ones! 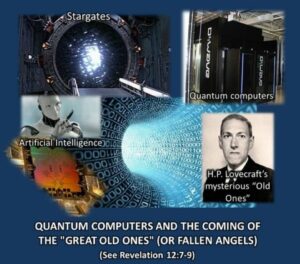 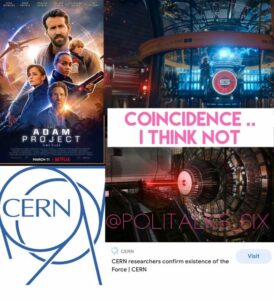