Ok ok, I know you want to keep the dietary laws of the Old Testament. There’s nothing wrong with that. I get it. Pork is unclean. Shellfish is unclean. There’s nothing wrong with wanting to stay clear of all that stuff. BUT you may want to also check out what’s in the food that you presently eat and drink. Ever heard of Senomyx? well, you may want to look into this San Diego-based company that uses “artificial” flavoring and additives in different food and drinks. Word is that aborted fetus tissue and cells are what make the artificial additives and flavors. This was an article from 2011. (http://www.miaminewtimes.com/restaurants/are-aborted-fetus-cells-helping-to-make-your-diet-pepsi-sweeter-6605629)

Who do you think they were selling them to? They were (are) selling them to companies like this.  There was even a bill from 2012 that tried to stop using aborted fetuses in food. (http://abcnews.go.com/blogs/health/2012/01/26/bill-would-ban-aborted-fetuses-in-food/) But a bill wasn’t obviously going to stop them. Now we even find human DNA in hot dogs. (http://abc7chicago.com/food/testing-shows-human-dna-in-some-hot-dogs/1051715/)

You can find the “additive” under the label HEK 293. It stands for “Human Embryonic Kidney cells, with 293 denoting that the HEK was from the 293rd experiment. HEK293 originally came from a healthy, electively aborted baby whose cells were then harvested and cloned.” Read all about HEK 293 here. (http://articles.mercola.com/sites/articles/archive/2011/09/01/what-you-dont-know-about-flavor-enhancers-can-harm-you.aspx)

As the New York Times wrote:

“Unlike artificial sweeteners, Senomyx’s chemical compounds will not be listed separately on ingredient labels. Instead, they will be lumped into a broad category — “artificial flavors” — already found on most packaged food labels.”

At least you can say good bye to sugar and msg and say hello to aborted fetus flavoring. It takes the term junk food to a whole new level. So how do we avoid this? Well just quit eating I guess. And if you think the vegetarian side of things is any better well think again. Look at the hot dog article and look into the GMO seeds. Technically the corn and corn by products isn’t even real corn…all GMO nonsense. So with that said, we can’t stop eating so just pray over your food before you eat In Jesus Name and let him set it apart for you and since you follow the dietary law, I’m assuming your going to pray after you eat too. That would be a good thing.

One more thing. Look at Senomyx logo. Notice that it looks like a single strand of DNA? Red and blue. Fire and water. If you know occult symbolism than you know what that means. When two worlds collide. Not to mention the single strand of DNA that they want to add to us so we can evolve into our higher selves. And did you see the strand ends at the X? Think along the lines of the mark of the beast being activated. It looks like they are doing this not only through the metals and nanobots in chemtrails but they have it in all food. I go through this more in my book.

Heres a few more articles if your needing more proof on what actually goes into your body.

Article on the patent of Senomyx. https://www.ncbi.nlm.nih.gov/pmc/articles/PMC123709/

Oh yeah, the majority of articles on Senomyx end up being pulled off, go figure.

This is a update to a article I did a few months ago on HEK 293, aborted fetus cells in our food. Now they want us to eat fecal matter and brains. They want to make you like them.

And this is the article that broke this HEK 293 story a few years ago.

In light of the spirit cooking story, the pedophilia story that broke (pizza gate) and knowing that HEK 293 (aborted baby fetus) is an artificial additive in most food or drink, I think this bar/museum may be relevant. Its located in Switzerland (land of CERN) and is owned by artist HR Giger (pronounced Geeger). Mr. Giger has done film design for Aliens (1&3), Poltergeist 2 and Species. And he is known for a painting called Satan (You will see the pic below). “Hans Ruedi Giger’s revelatory depth and power will be felt as long as people care about art. His draughtsmanship surreally summoned forth the darker side of the human collective unconscious, mapping new shadow worlds that need facing. To say he wrestled with demons was an understatement.  They posed for him.  He resurrected and honored them. Giger gave fear a new face, a futuristic alien mother with fangs.  HRG’s work was powerful because it tapped symbolic visionary archetypal mythic dimensions of the psyche that not even Freud or Jung could have imagined. The Alien head vaguely recalls the shape of the Egyptian Shadow God, Set.  Giger’s work was deeply informed by the Egyptian pantheon, iconography and occult intelligences.” (http://alexgrey.com/gigers-shadow/)

He was deeply influenced by alchemical psychologist Carl Jung. He had made what is called The Birth Machine. It’s a gun that shots squatting babies as bullets. This is featured in his museum/bar along with other demonic sculptures and paintings. “Two levels of the building highlight the entire span of his career, including wall-size airbrushes of wicked Baphomet imagery, Lovecraftian horror scenes and bald women whose nether regions morph into weapons. Also present in the museum are the actual latex creatures from Alien, a wall of Giger tattoo photos and — behind the 18-and-over curtain — “Penis Landscape,” the infamous artwork that got Jello Biafra of the Dead Kennedys arrested and tried on obscenity charges.” (http://www.gonomad.com/1174-spooky-switzerland-alien-nightmares-and-mystical-savages)

“The womb-like interior of the otherworldly environmentthat is the H.R. Giger Museum Bar is a cavernous,skeletal structure covered by double arches of vertebraethat crisscross the vaulted ceiling of an ancient castle.The acute perceptual sensation of being in this extraordinary setting recalls the Biblical tale of Jonah andthe whale, lending the feel of being in the belly of afossilized, prehistoric creature.” (https://drive.google.com/file/d/0BwuUBwTrZu4qWTlvNzJfSmN6TkE/view?usp=drivesdk) “Ascending a spiral wooden staircase, we eventually arrive at a room featuring huge airbrushes of The Spell, I, II, III and IV — one on each wall. Spell III includes Giger’s version of the Baphomet symbol at its center, complete with the Caduceus — two snakes coiling into a figure 8 around a shaft. Baphomet and the snakes represent male and female energy or dark/light polarity.” (http://www.gonomad.com/1174-spooky-switzerland-alien-nightmares-and-mystical-savages)

This bar is so demonic and features aliens and demonic babies on the wall, you probably couldn’t guess what they serve there? Yep, pizza (see menu below). I think the pictures of this place say enough. He has also done paintings with “aliens” having sexual relations with women. I don’t even know what else I can say about this place other than this “womb like interior” of this bar is described as being “in the belly of the beast” and paralleled to Jonah being in the “whale” (or let me say leviathan in this case).  This guy is definitely a Satanist and no telling what is really going on there. Look at the pictures I posted below, it’ll blow your mind.

We have seen that HEK 293 (aborted fetus cells) are being used as artificial flavoring in food and drinks. Pepsi Products are one of the many companies who use this Genetically Modified flavoring. Matter of fact, now it’s on the labels of all Pepsi products that use it.

So let’s welcome LIFEWTR to the world. What a strange name to begin with but when you look at there advertisements and commercial, you see alot occult symbolism. If there is HEK 293 in this Pepsi product then the name seems fitting doesn’t it? LIFE WATER…minus the vowels of course. Also notice the rainbow symbolism. You have the year of oz and the goat. Do they want to take you over the rainbow with their transgender agenda or is it the Noahide Laws with their rainbow? And what about the all seeing eye peeking through the 666 hand sign? You can even take a selfie to make yourself feel like your a part of this image of the beast. How great is that? And what about the little girl on the commercial who has her mouth open and arms wide, who seems to be ready to embrace this change? But its just water right? 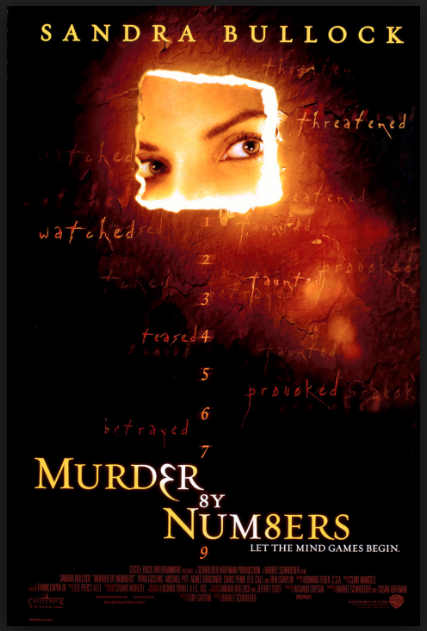 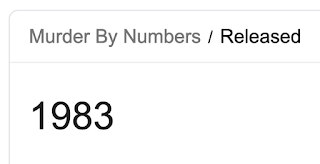 The song ‘Murder by Numbers' was released in '83.

In the movie poster, those are Sandra Bullock's eyes.

This film released in her 38th year of life, 38-weeks and 1-day after her birthday.

For one last point, don't overlook the orange 7 and 9 that surround the words in the poster.

Of course it is the ‘Society of Jesus' behind all of this, or the Jesuit Order.

This song Came out in 1983 38 Years Before AGENDA 21, George Floyd killed ON 38TH street.
Murder By Numbers
The Police