This is like with Hillary Clinton, who also went to Yale testing Positive on 3/22. 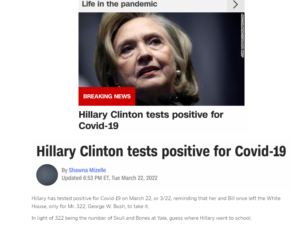 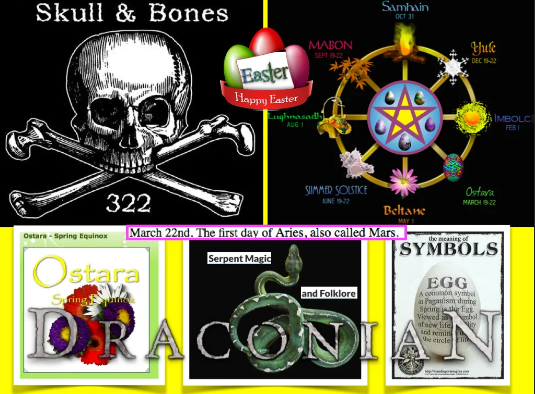 Secret of the Skull & Bones 322 Revealed

Lets Not For Get the Scripted George Floyd Ritual! Rember they Changed His Time to 9:29, Mark down 12-14-2022 Becouse December Fourteenth=929

“covid” = 26 (Reduction), The Beast=26, Plague=26, Virus=26, Devils=26 12-14-2020 The Day the Vaccines went Live During The Corona Eclipse In Argentina, That Was the Halfway Point Between the Two great American eclipses that made the X On America, the X Representing Osiris, Who was Cut up in 14 pieces! The 14th! Trust Right That day on Calender For Scriped Rituals! 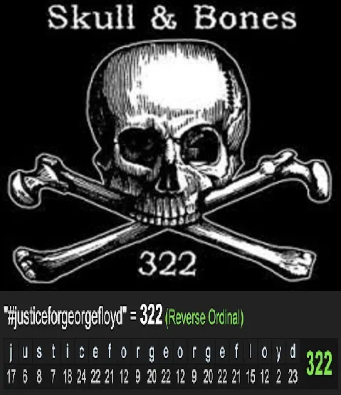 They can not help Their Selfs, They always leave their Finger Print!! 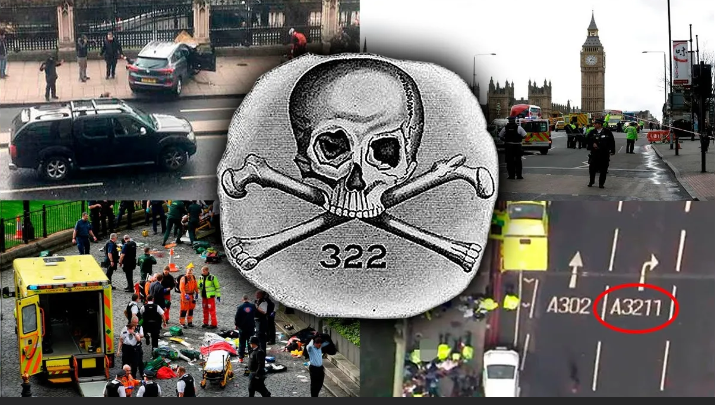 Sheriff John McMahon is obsessed with the number 27 and may in fact be proxy affiliated with Skull and Bones via his involvement in the Redlands Order of the Nine Angels.

13  8= Meissa, Alnitak, Rigel and Saiph, the combination of
which forms an inverted tsade

14 Orion= triptych 6, although this is also the number of stars used to represent the composite Star of David. Seven stars inclusive of Alnilam= Menorah, 3+ 7= 1= SOD

16 The elite among Orion-identified fraternities are Satans and practice the hijack, reform, and solidarity (HRS) triptychs.

Skull and Bones triptych ciphers 3 which also= Lucifer, the point of this demonic presentation upon the public masquerading righteous. Tsade= Skull and Bones (SAB) METRIC, Lucifer this organization‘s preeminence as a demonic entity that parades itself to the public as a good works entity. McMahon is an institutionally protected serial killer.

McMahon is a double-crossing POS devil. He initiated on Corinna Novis (1986) typical of occult process and asset renditioned Sylvia Marie Flores with impunity from his fraternal brotherhood identified with the Redlands ONA, the latter victim one of Gary Even Baugh’s SKIRTS projects in connection with his service with the Redlands LDS temple and Finchy Elementary School in Palm Springs, Finchy an LDS Mormo Melchizedek controlled public school identified with the Tubal Cain Vulcania and child sacrifice.

Sheriff John McMahon is a Satan and- typical of his demonic frat identification- is pulling a con on a public that he has been giving rein over to do with whatever he likes, to dispose of anyone anytime with fraternal impunity networked throughout the county via his Scottish Rite occult affiliation with the LDS church and their ONA project in Redlands.

McMahon is currently being prosecuted in San Bernardino Superior Court over his involvement in his deputies having assaulted Francis Pusok, the real point of the event two-fold: 1) to attempt to make him appear to be willing to hold his deputies accountable for a crime he himself staged to save his reputation, career and domestic life having been discovered involved in the Flores slaying, and 2) occult human trafficking for snuff entertainment.

Novis to Flores to Pusok, McMahon is playing the public with support from his Scottish Rite Mason promoters who put him in office in the first place and networked with the University of Redlands, Superior Court less a challenge to his reputation than a shelter from which he will emerge faultless and officially cleared and restored to business as usual, a well-practiced and lethal predator beyond what Ted Bundy or William Suff ever was.

For those who are unaware why Pusok can be considered an engineered assault, 9 April 2015=  the 99th day of the year commemorative on SAB, Item #9 in the FNCS analysis above. Sheriffs were on a mission to control a person they believed was a criminal suspect with the full force of the law, inclusive of provocateurs' escalation to a kill if they could get away with it to commemorate the use of deadly force against an otherwise non-lethal individual. Fortunately, this victim survived.

Also, Pusok appears to be subdued in an area perfectly aligned with Gary Evan Baugh’s 2.7-mile ONA geo-cartographic, which if correct confirms he was a structured hit engineered on a Scottish Rite/LDS Polemic.

Pusak was attacked commemorative on righteous demon John McMahon occult stealth. That’s why the assault date in connection with the Skull and Bones encryption, the price tag for this theatrical stunt that robbed Pusok of dignity $650,000.00 at taxpayer expense.

I can confirm McMahon’s treachery. I have a letter from one of his subordinates that threatened my life for reporting one of his street raptors involved in attempting to stage a coup on my family via Adult services and San Bernardino Superior court. I backed them off but was subsequently also threatened twice by court mediator, Bob Habel. These people are obsessive, METRIC, evil, and dangerous, and they do not give a fuck about the constitution.

This is no game. The people of San Bernardino and Redlands have no idea these things are going on around them, the only thing that is going to save this community intensive education in civics which the administration has no intention of undertaking, for obvious reasons. Aside from the mystification of such events manifesting in the public, in reality, snuff kills such as Elizabeth Short (1947), Cheri Jo Bates (1966), Laurie Lynn Partridge (1974), Corinna Novis (1986) and Sylvia Marie Flores (2013) are first and foremost frat pledge activities which function as a catalyst for fraternal solidarity, Francis Pusok lucky he’s alive, which I doubt was their original intention.

Now take a moment to rethink Sylvia Marie Flores. For those of you who are puzzlers, Using Google Earth, Scribe a line from the location where Flores's body was dropped after her slaying to Katherine Finchy Elementary School in Palm Springs. Do observe two other locations where this line manifests TDC: The Redlands LDS temple on 5th Avenue and an off-campus student housing location on Citrus Avenue. The latter is TDC ONA the location where there were to have been two other abductions.

The drawing you made to connect Flores to locations identified with the Mormo church is referred to as a straight-line cartographic. Notice the landscaping around the temple is laid out on the uterus complete with a fertilized egg and the method LDS uses to take the black mass fetus from its SKIRTS captive on the right. This is LDS sentimental breeding black mass. Surrounding this area but not seen is an ONA geo-cartographic, this location’s signature on many such crimes in the region.

Back to Pusok for a moment, what is to be understood here is there is yet another feature of his attempted deadly assault that bears identified with Redlands ONA. We know the date of this incident commemorates a Skull and Bones constant, 66 (numerology). We also know the location where he was beaten lines up on the Redlands ONA geo-cartographic (cartography). McMahon’s third Polemic alignment is astrologically identified with Tsade (Orion Constellation).

If we use Bill Clinton’s 16 January appearance at Finchy Elementary School in Palm Springs as a calendar anchor on 9 April 2015 we get 13 thus:

Clinton’s 16 January 2013 appearance at Finchy was instrumental in the Sylvia Marie Flores abduction as well, and this doubled up with Jeff Epstein’s appearance in Redlands in September 2012. Flores was in the walking dead with Epstein. Clinton confirmed her rendition on 16 January, Sheriff John McMahon in collaboration with DA Mike Ramos made this so on LDS president Gary Evan Bough’s engineered rendition scheme.

Francis Pusok was a game animal for these mind fucks, an exercise in at-will rendition, this individual was targeted based on his rap sheet making it appear this kill would have been justified same as they made it appear Flores was a crime of passion because she was a 23-year-old prostitute.

Not to let any detail slip away in these ghoulish nightmare circumstances, Francis Pusok triptych ciphers 9 AKA 27 for Genesis 6:2 and Orion/Masons. This man survived because of his toughness, the deputies that assaulted him, inclusive of those who were not charged with felony assault, intended to kill him, the Divine making a presence now to be understood these lowlifes are on their way back to hell, including Baugh’s ONA rendition team.