Jess Valenzuela, a 20-year-old Dreamer, sets off on an exploration to discover the mystery of her family history, and, with the help of her friends, seeks to recover historical lost treasure. Session 1 EP 4 Released on #14th 24:24 Into that EP We see the Below Code 8-11-1938
“Jess Valenzuela” = 172(Ordinal) Illuminati card game=172, Two Two Three=172, HAARP PAT On 8-11-97 the 223 day of the year and we are in 2023=223!    Three Two Two=172, 322 Skull an ones, Thhhis whole Series is about secreat socitys and Putting together Puzzels. World War Two=172, A Scarlet Red aurora borealis was seen in 1938, Hitler said now we will shead blood!!! Video is Below. And the 811 is the Code is Connected to Weather Becouse haarp was pat that day. And “Wormwood” is the name of a star in Revelation 8:11: “The third angel sounded his trumpet, and a great star, blazing like a torch, fell from the sky on a third of the rivers and on the springs of water—the name of the star is Wormwood.Forty Fourth=172, and HAARP=44, From what Hitler Seen in the Sky until the release National Treasure: Edge of History Saturday, January 22, 1938
To, but not including Wednesday, December 14, 2022=1018 months the refection of 811!!!!!

The Merovingian kings were noted sorcerors in the manner of the Samaritan Magi, and they firmly believed in the hidden powers of the honeycomb. Because a honeycomb is naturally made up of hexagonal prisms, it was considered by philosophers to be the manifestation of divine harmony in nature. Its construction was associated with insight and wisdom – as detailed in Proverbs 24:13-14: “My son, eat thou honey, because it is good… So shall the knowledge of wisdom be unto thy soul…”

To the Merovingians, the bee was a most hallowed creature. A sacred emblem of Egytian royalty, it became a symbol of Wisdom. Some 300 small golden bees were founded stitched to the cloak of Childeric I (son of Meroveus) when his grave was unearthed in 1653. Napoleon had these attached to his own coronation robe in 1804. He claimed this right by virtue of his descent from James de Rohan-Stuardo, the natural son (legitimized in 1667) of Charles II Stuart of Britain by Marguerite, Duchesse de Rohan. The Stuarts in turn were entitled to this distinction because they, and their related Counts of Brittany, were descended from Clodion’s brother Fredemundus – thus (akin to the Merovingians) they were equally in descent from the Fisher Kings through Faramund. The Merovingian bee was adopted by the exiled Stuarts in Europe, and engraved bees are still to be seen on some Jacobite glassware.” 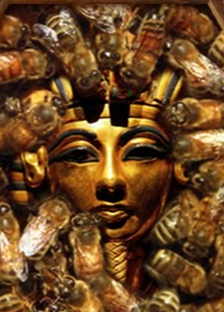 Adolf Hitler Saw Nibiru in 1938. The Truth about the Third Secret of Fatima & WW3.

Antichrist is Coming out of this Merovingian Bloodline

The Bee symbolism relates to the Merovingian royalty see also The Matrix movie and the European Royal bloodlines. In alchemical and occult texts the bee and the serpent are often used to denote the hive (bloodline) and it’s link to a genetic stream that, in my view, is overshadowed by an alien ‘predator’ consciousness. If you control the ‘bees', you control the ability to ‘give life' on Earth.

We must take our Symbols Back!!!! 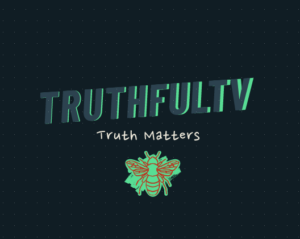 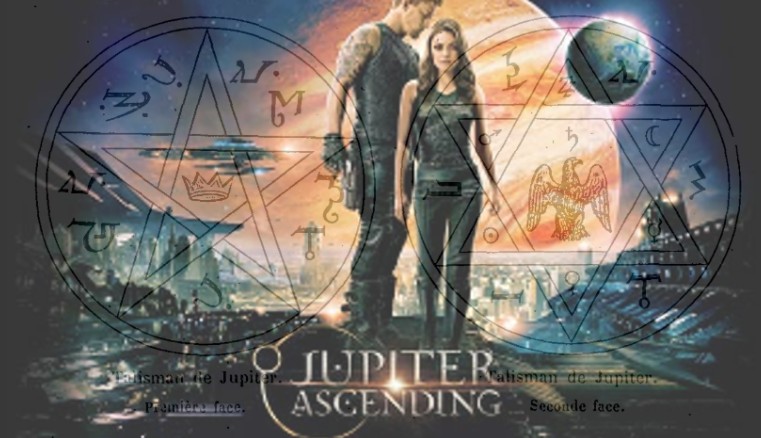 The 33rd Degree Freemason and historian points out in his book, ‘The Secret Teachings of All Ages’ that the Bee and the Fleur-de-lis symbol are interchangeable. So in the movie, we have a scene where Jupiter (Milas Kunis) is taken into care by Sting Apini  (Sean Pen) a Han Solo figure with part Bee DNA, to be protected. There she is quickly shown to be a ‘commander of Bees’ and from then on in the movie the two fallen angel protectors, Caine and Sting refer her to as ‘royalty’.

It’s also worth noting that the bee was an emblem of Potnia, the Minoan-Mycenaean ‘Mistress’, also referred to as ‘The Pure Mother Bee. Her priestesses received the name of ‘Melissa’ (‘bee’) and in addition, priestesses worshipping Artemis and Demeter were called ‘Bees’. The Bee symbolism in the film is blatant and could be reinforcing the idea of a revolution from within the ‘elite’ hierarchy. The lion symbolism is also important here because it has been used to both ‘enslave’ humanity as much as it is now been used to ‘set free. 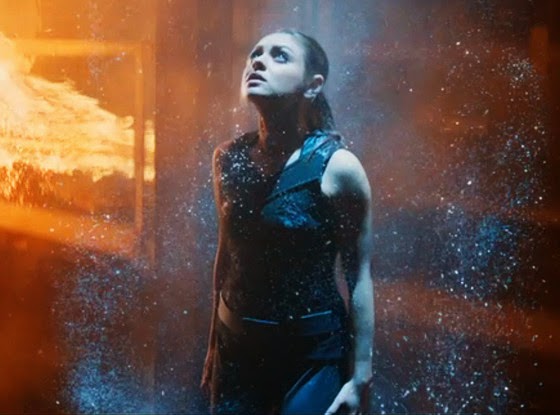 Another aspect of Jupiter Ascending is the link to Lucifer being a woman and Jupiter Jones is clearly depicted as the ‘double goddess’ in the film. She is both mother of the Abrasax (Archons) and the ascending queen of the Earth. She is therefore Sophia, Isis, Demeter, Venus (the Maleficent as her dark side), and the star that rises (ascends) in the sky. The Wachowskis couldn’t have made it any plainer.

The Bee symbolism relates to the Merovingian royalty see also The Matrix movie and the European Royal bloodlines. In alchemical and occult texts the bee and the serpent are often used to denote the hive (bloodline) and it’s link to a genetic stream that, in my view, is overshadowed by an alien ‘predator’ consciousness. If you control the ‘bees', you control the ability to ‘give life' on Earth.

The figure above left shows 13 bloodlines (bees) feeding off the queen serpent goddess. In essence, the Alien Dynasty, needs an Earth-bound dynasty, ‘with the same DNA’, to govern the genetically modified ‘worker bees’.  It’s said to be the Eve Gene that gives us some scientific evidence for a Mitochondrial ‘Queen Eve’ named after mitochondria DNA, and I would say that homo sapiens is the current ‘model’ that has been implanted or supplanted on Earth to do as it is told.

The Bee and the serpent was a symbol associated with the Hyksos priest-kings (or Shepard Kings) of Egypt and their connection to what later became the aristocratic families of Europe, not least the Rothschild banking elite. Could the Abrasax who rules from Jupiter (in the movie) be a mirror of the rule over the Earth's resources by these elite families on behalf of their off-planet ancestors? Of course, they could.

The Fleur-de-Lis and the Bee

of bees, many of which are indiscernible to the pedestrian eye, have symbolised goddesses for tens of thousands of years. One quite famous image that many believe symbolises a bee, albeit a more modern image than the famous goddess statues from pre-history, is the fleur-de-lis. As tantalising as this association may be, I’ve always felt that it lacked sufficient visual evidence. However, I recently came across an intriguing family crest in southern Germany, which may begin to change my opinion on the matter. Before examining the find, I would like to review another iconic image that has received somewhat greater acceptance with respect to its association with the bee. I speak of the double axe.

Did the double axe of the Minoans depict a stylised bee / goddess?

In 1958 an obscure but scholarly book, Apiculture in the Prehistoric Aegean, suggested that the double axe of the Minoans was actually a stylised bee. This resonates with my own research, which has revealed that archeologists in the Neolithic settlement of Çatalhöyük, Turkey, observed that the double axes they were excavating resembled butterflies, images of which are easily mistaken for bees. (Çatalhöyük contains a wealth of bee symbolism, which I have chronicled in my research and which I discuss in my lectures.)

In other words, the double axes of both cultures appear to have been veiled in similar, if not identical, symbolism. This is intriguing, for DNA has revealed that the people of Çatalhöyük migrated to Minoan Crete. What’s more, the word labrys, derives from the ancient Turkish (Lydian) word for ‘double axe’, and Knossos, the capital of Minoan Crete, was known as the ‘Palace of the Double Axe’. Given that the double axe represents a stylised bee and/or goddess, this renders Knossos not the ‘Palace of the Double Axe’, but rather the ‘Palace of THE BEE (Goddess)’.

This realisation also demands that we re-examine the notion of the ‘Labyrinth’ at Knossos (which I discuss in my lectures), as this word also derives from labrys. Linguistics aside, even on the most cursory of levels the bee’s significance in Knossos is hard to refute. Take, for example, the account of King Minos, whose son drowned in a vat of honey, an illuminating fact whose implications have been largely overlooked. One could see how a child could easily drown in one of the gigantic pithoi, or storage jars, used at Knossos © Andrew Gough

This brings us to the assertion that the fleur-de-lis may also have represented a bee, a theory supported by many, including the French physician, antiquary and archaeologist, Jean-Jacques Chifflet. However, to understand how such an iconic symbol could represent a bee, we must first understand the bee’s importance in French culture.

Napoleon Bonaparte, the famed military and political leader of France, ensured that the bee was widely adopted in his court, as well as in the clothing, draperies, carpets and furniture of the country at large. By choosing the bee as the emblem of his reign, Napoleon was paying homage to Childeric (436–481), one of the ‘long-haired’ Merovingian kings of the region known as Gaul. When Childeric’s tomb was uncovered in 1653 it was found to contain 300 golden jewels, styled in the image of a bee, and these are the same bees that Napoleon had affixed to his coronation robe.

Napoleon’s choice of the bee as the national emblem of his imperial rule also spoke volumes about his desire to be associated with the Carolingians and Merovingians, the early French kings whose funerary furniture featured bee and cicada symbolism as a metaphor for resurrection and immortality. The bee was a hugely important icon of Napoleon’s reign and his obsession with its symbolism gave rise to his nickname, the Bee.

The bee was also a vital symbol of French industry and one of the most prominent emblems of the French Revolution (1789–1799). In fact, Louis XII, King of France, was known as the ‘father of the pope’ and had featured a beehive in his coat of arms. And so the bee remained a prominent element of French culture throughout the First and Second Empires (1804-1814 and 1852-1870) due to the enthusiastic patronage it had previously received.

Does the fleur-de-lis represent a bee?

Despite the plausibility that the fleur-de-lis may symbolise the bee,

I found a coat of arms that visually associated the bee with the fleur-de-lis.

Does this Coat of Arms in Konstanz Cathedra represent the fleur-de-lis as a bee?  © Andrew Gough

The coat of arms, one of many in Konstanz Cathedral, depicted six beehives beneath three fleur-de-lis, complete with an entrance to the hive. It even depicted two bees on either side of the hives. Above the image is a gold crown, representing royalty, a concept that has been associated with bees for thousands of years. While many coats of arms depict bees and many, of course, depict the fleur-de-lis, this was the first time I had seen them associated in such an unambiguous fashion.

The coat of arms in Konstanz Cathedral does not prove that the fleur-de-lis symbolises the bee, but it does graphically illustrate that there exists a belief that the bee was, and still is, a vital symbol of our past, present and future. And that is worth remembering.