It looks like the torrent of NASA lies continues to flow without abatement. We have recently discovered that the 1986 Challenger explosion which occurred 73 seconds after launch claiming the lives of all 7 passengers was yet another NASA lie. Sacrifice=73 Using English ordinal Gematria Explosion was 73 seconds after take off!
We are certainly not surprised that the agency whose logo includes a forked snake’s tongue has lied to us yet again. But we are surprised that it took us so long to find out the fraud. I guess we have spent so much time on larger conspiracies such as the laughable moon landing hoax that we overlooked this comparatively smaller lie.
We have not been able to confirm if the explosion was real or a computer-animated snow job, but we can confirm that 6 of the 7 crew are alive today. The ever fraudulent Wikipedia maintains with a straight face that all of the crew died in the explosion.
Ellison Onizuka is masquerading as his twin brother Claude. 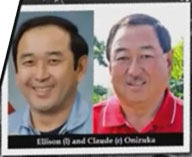 Pilot Michael J Smith doesn’t claim to be his twin brother – he is using his real name in blatant contempt for the fraud as a professor at the University of Wisconsin. 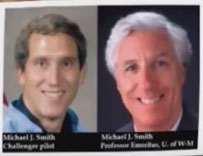 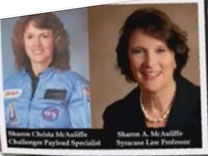 The shuttle commander Francis R Scobee is reversing the McAuliffe fraud by now using his middle name as his first name. Known as Dick Scobee, he is the CEO of Cows in Trees Limited. We wonder how many of his customers he has taken for a long ride with no return. 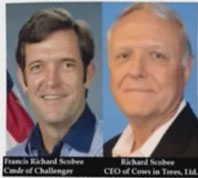 Judith Resnick, like her comrade Michael Smith, has not bothered to conceal her name. Ms Resnick is a law professor at Yale University. It is not breaking news to learn that Yale University is a major sponsor of fraud.

And finally to prove that fraud and lying know no color bounds, Ronald McNair is masquerading as his twin brother Carl.

The only question is, What happened to Gregory Jarvis? Did he die of natural causes? Was he murdered to warn the others to keep quiet? Was he loaded on the shuttle and then exploded?
So, boys and girls, the crew of the 1986 Challenger mission did not die in an awful explosion. At least 6 of them are alive – at least as of a few months ago – carrying on their lies for their Freemason sponsoring organization NASA.
Flat Earth Biggest Lie of All, nd, accessed 5/15/2016 at https://www.youtube.com/watch?v=Yt-g5PkXJfQ
The Challenger Hoax” = 1111 (English Extended) 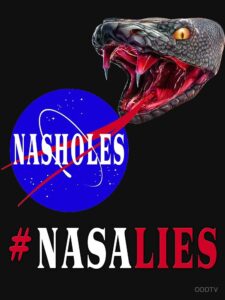 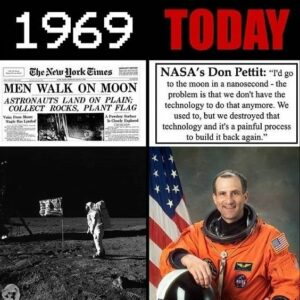 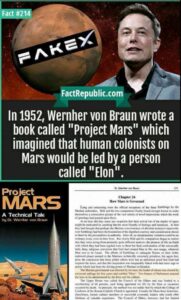 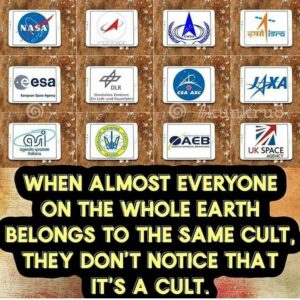 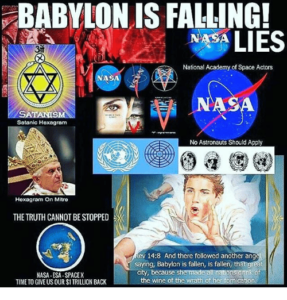 The earth is shaped like a coin: circular with topography, fixed, and covered with a solid covering. The Bible describes a flat, motionless, and covered earth.

1. coin-shaped like a circle and like a seal (stamp)
– specifically not a sphere
* a circle is a flat disc, NOT a sphere

Isaiah 40:22
It is he that sitteth upon the circle of the earth
Job 22:14
he walketh in the circuit of heaven
* circuit implies continuous enclosed circular path

Proverbs 8:27
he drew a circle on the face of the deep

Job 26:10
He hath compassed the waters with bounds.

Isaiah 24:1 Behold, the Lord maketh the earth empty, and maketh it waste, and turneth it upside down, and scattereth abroad the inhabitants thereof.

Matthew 4:8 the flat expanse
Again, the devil taketh him up into an exceeding high mountain, and sheweth him all the kingdoms of the world, and the glory of them;

This is not possible on a sphere.

Earth is fixed and immovable

1 Chronicles 16:30
the world also shall be stable, that it be not moved.

1 Samuel 2:8
the pillars of the earth are the Lord’s, and he hath set the world upon them.

Zechariah 1:11
all the earth sitteth still, and is at rest.

Hebrews 12:26-28
26 Whose voice then shook the earth: but now he hath promised, saying, Yet once more I shake not the earth only, but also heaven.
27 And this word, Yet once more, signifieth the removing of those things that are shaken, as of things that are made, that those things which cannot be shaken may remain.
28 Wherefore we receiving a kingdom which cannot be moved

By Paul Nasalies Thomas
The hell-lie-sin-trick (heliocentric) model contradicts the word of God. Christians must choose their final authority, the Bible or satanic nasa, because you can’ pick both.

“As for me and my house, we shall serve the Lord.”

3. Covered and sealed with the firmament
– “Firmament” in the masonic/jesuit Bible comes from the original Hebrew term “raqia” which means “solid/impenetrable clear covering.”
– ‎Strong’s Concordance 7549 “raqia,” http://biblehub.com/hebrew/7549.htm
The Firmament of Genesis 1 is Solid but That’s Not the Point
https://biologos.org/blogs/archive/the-firmament-of-genesis-1-is-solid-but-that%E2%80%99s-not-the-point

Job 41:11 whatsoever is under the whole heaven is mine.
* anything under the dome

Psalm 19:1
The heavens declare the glory of God; and the firmament sheweth his handywork.

Sun, moon, and stars are “lights in the firmament;” sun and moon move in circles above the flat earth, on a precisely timed, repetitive circular scale, like a creation-size watch dial.

Mark 13:24
24 But in those days, after that tribulation, the sun shall be darkened, and the moon shall not give her light,

Regarding the firmament/raqia: Now we know what is on the other side.

Mark 13:24-26 describes the coming of Christ as the rending of the firmament/raqia to reveal the Kingdom of God all around and above us. Not to mention the sun and moon as separate sources of light.
24 But in those days, after that tribulation, the sun shall be darkened, and the moon shall not give her light,
25 And the stars of heaven shall fall, and the powers that are in heaven shall be shaken.
26 And then shall they see the Son of man coming in the clouds with great power and glory.

In the last days / final coming of Jesus Christ:

Isaiah 34:4
the heavens shall be rolled together as a scroll: and all their host shall fall down, as the leaf falleth off from the vine, and as a falling fig from the fig tree

Joshua 10:12-13
12 Then spake Joshua to the Lord in the day when the Lord delivered up the Amorites before the children of Israel, and he said in the sight of Israel, Sun, stand thou still upon Gibeon; and thou, Moon, in the valley of Ajalon.
13 And the sun stood still, and the moon stayed, until the people had avenged themselves upon their enemies. Is not this written in the book of Jasher? So the sun stood still in the midst of heaven, and hasted not to go down about a whole day.

5. He hath compassed the waters with bounds.
Job 38:8
Or who shut up the sea with doors, when it brake forth, as if it had issued out of the womb?

Job 38:30 [reflecting the ice covering compassing the Creation]
The waters are hid as with a stone, and the face of the deep is frozen.

Warnings against trusting in the worship of the sun, moon, or stars, i.e., the wisdom of peeping wizards (i.e., NASSA)

Deuteronomy 17:3
And hath gone and served other gods, and worshipped them, either the sun, or moon, or any of the host of heaven, which I have not commanded;

2 Kings 23:5
And he put down the idolatrous priests, whom the kings of Judah had ordained to burn incense in the high places in the cities of Judah, and in the places round about Jerusalem; them also that burned incense unto Baal, to the sun, and to the moon, and to the planets, and to all the host of heaven.

According to Jeremiah 8:2, the Bible says NASSA shall become as dung upon the face of the earth.

1 Timothy 6:20-21
20 O Timothy, keep that which is committed to thy trust, avoiding profane and vain babblings, and oppositions of science falsely so called:
21 Which some professing have erred concerning the faith.

Results of the curse

Deuteronomy 29:20
The Lord will not spare him, but then the anger of the Lord and his jealousy shall smoke against that man, and all the curses that are written in this book shall lie upon him, and the Lord shall blot out his name from under heaven.

Job 38
4 Where wast thou when I laid the foundations of the earth? declare, if thou hast understanding.
5 Who hath laid the measures thereof, if thou knowest? or who hath stretched the line upon it?
6 Whereupon are the foundations thereof fastened? or who laid the corner stone thereof;
8 Or who shut up the sea with doors, when it brake forth, as if it had issued out of the womb?
11 And said, Hitherto shalt thou come, but no further: and here shall thy proud waves be stayed?
13 That it might take hold of the ends of the earth, that the wicked might be shaken out of it?
14 It is turned as clay to the seal; and they stand as a garment.
18 Hast thou perceived the breadth of the earth? declare if thou knowest it all.
19 Where is the way where light dwelleth? and as for darkness, where is the place thereof,

Jeremiah 31:37
Thus saith the Lord; If heaven above can be measured, and the foundations of the earth searched out beneath, I will also cast off all the seed of Israel for all that they have done, saith the Lord.

Proverbs 25:2-3
2 It is the glory of God to conceal a thing: but the honour of kings is to search out a matter.
3 The heaven for height, and the earth for depth, and the heart of kings is unsearchable.

Nature of the sun, what the sun and moon really are

Magnetic Flat Earth
On the nature of the sun – and moon, by association.
https://youtu.be/nPlNcJ_IC5w

One thought on “The Challenger Hoax NASA Lie.”