Batman and Joker, Dark Knight of the Soul 7-18-22 Important Message!

And The Riddler Riddle…

Looking into the James Holmes Aurora theater massacre in 2012 led me to a blog called Mind Control Black Assassins, the author of which wrote a piece comparing the Joker and Holmes, which woke me up and set me on the path to everything that would become the material for this blog.

In the Batman franchise, it was not the Joker but another villain, the Riddler, who, at his crime scenes, purposefully left clues for Batman and/or detectives to follow. He wanted to be found. In the same way, I learned that the Illuminati leave clues behind their false flags and media productions as a way to gloat, communicate, and to see who has eyes to see.

But it is the Joker who is most misunderstood. In tarot, the Fool card later evolved into the Joker card in the modern playing deck. In its pure form, the Fool, card 0, represents super-consciousness or Deity, or your Higher Self. You see him staring up into that next horizon, always striving, always growing, but in order to get to that next peak, must first descend into the valley of incarnation. He must limit himself, he must figuratively “die” and be dismembered, this is the dying God in all mythology who must be resurrected through the son, through us, human souls, his dismembered fragments.

The Fool is depicted as a youth, because super-consciousness is forever young. His youthfulness and silliness link him with the court jester archetype (see my post Jesus the Jester Fool), who, in medieval times would entertain the King:

This character was also known as the Jack, like Jack-in-the-Box (again a symbol of the incarnating god into the matter, or the “box.”)

And Heath Ledger and James Holmes who play this forever-young fool role were both young men themselves. One is now dead (allegedly), the other, serving a life sentence in prison.

Princeray writes, “In his first court appearance, witnesses described Holmes, “head nodding, eyes rolling around and wildly blinking at times, Holmes did not seem to be fazed by what was happening in front of him, but almost totally oblivious to it as he appeared to struggle with consciousness.”[26] Of course, it strongly suggest that he had undergone some type of extensive “naro-hypnotic” programming. Holmes will end up like Sirhan Sirhan locked in a maze of amesia barriers and layers unable to recall the shootings and the events leading up the massacre.”

For more on Holmes see the Black Assassins article HERE. In brief, it appears that he was not your usual false flag patsy with a vague history. He was a very gifted student of neuro-biology and was doing work on the temporal lobe and its ability to stimulate temporal illusions, at the Salk Institute, a very prestigious biotech giant:

In the video, a younger Holmes described his internship with Jacobson at the “monastery-temple” and the Computational Neurobiology Laboratory.

But rather than speculate on how this gifted young scientist became a so-called “lone wolf shooter,” and whether or not MK Ultra was involved, let’s return to the symbolism of his role as the Joker:

And the Joker in A Dark Knight is not interested in money but in ideals; he burns up all the money:

Meanwhile his nemesis, Batman is a rich, spoiled brat. Once you see this, it’s quite clear how the Christ and Anti-Christ roles in these films are being divvied out. Fans who glorify Batman are being led to value this Satanic inversion. In addition, notice how it the Christ character Heath Ledger who is sacrificed.

(As a brief aside, these Hollywood actors are known to have codes of their own that follow them from film to film. Christian Bale who played Batman, did another film with Nolan, The Prestige, in which the role was reversed and he got to play the Christ role) –

He gets shot in the hand, bloodies his hands like Christ on the cross, shot by his rival Angiers (the angler, the fish-hook, Sandy Hook, the J, Judas the betrayer, the scorpion of matter, the poison sting…) Borden (Bale) also properly sacrifices himself at the end for his craft, his magic act.

But returning to his anti-christ role as Batman –

He was supposedly buried in Corona Del Mar, shortly before the Corona plandemic began.

Bats, being nocturnal and often blood suckers are obvious symbols of evil; darkness; vampirism. And I can’t help but make the connection to the initial rumors spread that the supposed virus started by the cross-contamination of bats and the Wuhan meat market there.

This was later called a hoax, and yet the elite with their tentacles in the CDC have been trying to push the SARS viruses from bats theory for over a decade. It has never been proven that a deadly pathogen comes from bats.

Not only visionary, but by design.

So just to recap, the Batman trilogy ala Christopher Nolan predicts several false flags, most notably the Aurora theater massacre in 2012 which was playing A Dark Knight Rises, featuring masked Bane. Bane used bombs at the stadium just like James Holmes supposedly rigged his apartment with bombs that fateful day. We also had the Boston bombing not long after, another sporting event. The football stadium features the Skull and Bones 322 shot, showing us we are on the right track for sniffing out these clues:

In the film prior, A Dark Knight, we saw the map with a strike point circled in red for “Sandy Hook.”

Once hooked by the sands of matter and time it is hard to get out. But that is why it is circled in red as a strike point, you must bomb that part of you that is aligned with the material world and all it’s vampiric bat-sucking power. That is why the Joker (the Fool – Christ) encourages you to bomb or strike down that alignment, and to burn up the money or “Mammon.” We are in Hell here, it is the dark night of the soul, but we are here for a reason. This is the dreaded valley that the Fool (super-consciousness) must descend into in order to reach that next, higher mountain peak.

The elite or the dark occult, the empty devils who sold their soul and suffered the second death for the rest of this aeonial cycle, are now tasked with waking us up and seeing how far each and every one of us buys in and accepts the blatant and pure evil that is traipsing across the main stage.

Those of us who see it for what it is and reject it will not have to face this challenge again in the same way. Sadly, the vast majority will have to play this out again. The name of their game is materialism. As Jesus said, “many are called but few are chosen.”

The 112 on the Truck to the Left The 16,000-plus Jesuits worldwide come from 112 countries and belong to approximately 80 provinces, but the order has “a universal character that transcends” these boundaries, according to one official Jesuit declaration. And you see this Movie Scene You have the Orange and Green the Color of the Joker! The Matrix Soul trap – https://tommytruthful.com/7-12-2022-the-matrix-soul-trap-live-tommytruthful-facebook-blocked/

118 on the Truck Behind Him The Matrix=118 , This is Connected to Golden Gate Bridge Ritual! 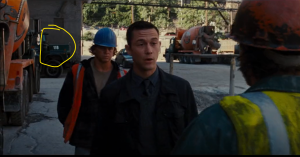 Source of a lot of the work he a good friend show him some love Family  – https://truthscrambler.com/

One thought on “Batman and Joker, Dark Knight of the Soul 7-18-22 Important Message!”